Industry Leaders Discuss How Competition, Technology and Consumers’ Need for Community Are Prompting a Constant Reinvention of Business Models in the Sector

Jonathan Komp, Baird’s Senior Research Analyst covering the fitness and wellness industry, moderated the discussion. Opening the panel, Komp set the context by describing just how expansive the fitness industry is: “Many of the industry sources would put the total size of the market north of 60 million members in the U.S. today, generating about $30 billion or north of that of total revenue. [This is] an area we've seen consistent increases in penetration and interest over time.”

After introducing the panelists, Komp steered the discussion to the ever changing dynamics impacting the fitness industry.

All of the panelists noted the recent explosion of options for consumers in the fitness industry – growth that does not appear to be abating. The large and growing set of options is there to meet demand.

Rondeau remarked: “Look at what's happening in this world. My parents never worked out. In the 90s, the only way you learned to work out was you have Beachbody, Muscle and Fitness, or Arnold Schwarzenegger's Encyclopedia of Body Building. That was the only source. Now it's in everybody's face, so the propensity for people to join is just out there and more normal today, more mainstream.”

Despite ubiquitous options, Rondeau noted that the percent of the U.S. population that has a gym membership today – 20% -- is only marginally higher than it was 25 years ago. He explains that the formula for acquiring those customers is more complex than one might think. “We thought it was price, which was important, but the atmosphere component was more important. You're not going to get the volume and my mom off the couch, even if it's free, if it's not the right atmosphere.”

Daikeler agreed. “Certainly the demand for [fitness] and the need for it are expanding, but customer acquisition and retention is as hard as ever, as technology disruption has democratized the ability to invent stuff. That means people are failing at many more things a lot faster and getting discouraged.”

Many of the panelists noted that a key ingredient to success with any fitness business model is creating a sense of community. Roering shared: “we try to make sure we're creating engagement; we're inspiring; we're educating; we're giving somebody a smile. We are always trying to make sure that we're engaging with folks that way. Creating community within the studio is easy, but then we also do hundreds and hundreds of events outside of our studios. We think that's really important for driving engagement with the brand both with our existing members, but also to give other people who have never walked in a studio the chance to try it and to just feel like they're doing it in a way that's different and unique for them.”

Freeman noted how certain boutique fitness classes, like her SLT (Strengthen Lengthen Tone), can feel intimidating to a new person, thus creating a barrier to acquiring that new customer. That community aspect is what led SLT to be more grassroots and tactical with their marketing strategy. “You really have to think of it as a local business, and each location has to think what's right for that market. Who is the queen bee mom at that school? Who is leading the mom group on Facebook? Invite them in and have them bring their friends. You need someone else to bring you.”

Like change in most industries, the panel of fitness leaders agreed that technology has had – and will continue to have – a huge impact on consumers’ demands and evolving business models.

Rondeau noted all of the ways in which future technology could provide gyms like Planet Fitness more information on their customers. “We unlock our doors and people walk in our gyms. We don't know how long you're working out for because you don't check out of a gym. We don't know what makes somebody stay three years [or] what makes somebody stay three months and give up. We know they punched in, but what journey did that three year person take? What did they use on the treadmill? What equipment did they use? What made that person stay? I think technology – how we map it and how we learn from it and how we give people a better experience based on what they're doing or not doing – I think it's super for our industry.”

Roering agreed, but noted that certain models were better suited for implementing that type of technology and data collection and learning. “Yoga is really a detox zone. It's where you have your phone somewhere else. You're not looking at your Apple Watch and all that. It really is about finally getting centered and getting inside your head. We'd like to make sure we keep that piece of it sacred.”

While Daikeler agreed that the power of technology was massive, he was also quick to note that it, by itself, could not change some of the fundamental challenges that are present in getting people more fit. “I've seen shirts with biometrics. My biometric shirt is going to sit in the drawer if I'm not motivated to do it. Technology alone is not going to solve the very human problem of influencing people to workout, because it's easy to ignore a reminder. It's easy not to open an app that's supposed to track my food.”

According to Daikeler, that’s where technology needs to be paired with the cultivated community component. “That's where this combination technology also unlocks incredibly compelling community,” said Daikeler.

The Next Business Opportunity in Fitness: Recovery

Freeman, who was formerly a market research consultant, likes to look closely at trends and noted a few areas where she sees a lot of future growth, many of which are focused on recovery – what you’re doing when you’re not working out. “There's cryotherapy. There's infrared sauna. CBD is everywhere right now. I think we're in the early days of it.”

Freeman added: “The good thing about recovery [market] is it's male and female, so the market is bigger. Men don't have a lot of alternatives for where they spend that extra disposable income. They're not getting as many massages. They're not getting manis and pedis and facials as much. This is the thing that they want. Even though we still have more females in the arena, it's the men that are our biggest spenders and that are the more loyal ones.”

During the discussion, panelists noted several times that there was an increasing need for good fitness options as the population continues to get heavier, stay sedentary and battle chronic illnesses more and more. Edwards noted that the fitness industry needs to be the solution to what is a public health issue: “You've got to put it all together. Nutrition is critical. Exercise is critical. Mindfulness is critical. I mean if you really want to perform, right? If you want to lose weight, you're right, you can lose weight by eating less, but I think that's not what we're talking about. We're talking about true wellness.”

And given that mandate, the panelists agreed that constant innovation is required to engage the typical consumer, who tends to be non committal. Daikeler said: “I think fitness… [is] constantly changing. I think it changed really fast. That's going to be the challenge for the fitness industry always because people get bored really fast.”

And the whims of customers will likely lead to some businesses thriving and others dying. Freeman believes there’s a lot of consolidation that’s yet to take place. “The space is getting very crowded. I think there's definitely going to be consolidation. I think there are some businesses that someone like a Class Pass has kept in business that would have gone out of business if not for Class Pass doing their marketing and filling their spots at cheaper prices. I think there are some businesses that Class Pass actually put out of business because it allowed their competitors who shouldn't be in business to take market share from them. Who knows what's going to happen to Class Pass specifically, but there's a lot of pricing pressure, as I said, on the boutique fitness space, and there's probably not room for everyone to survive.” 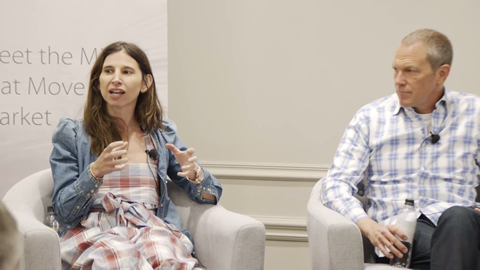 Amanda Freeman, Founder and CEO of SLT, addresses the audience as Carl Daikeler, CEO of Beachbody looks on. 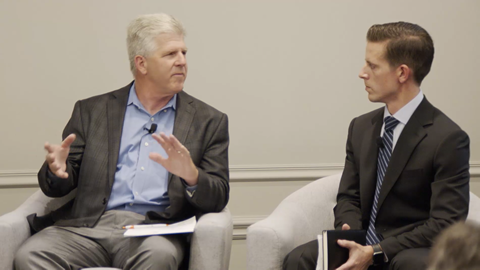 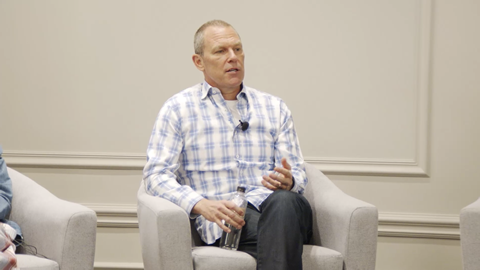